The Barony of Rowany was originally known as the Barony of Outremer, belonging to the Kingdom of the West. This Barony is based in Sydney, New South Wales, Australia.

The Barony of Outremer was created on 1 October 1981, and was renamed to the Barony of Rowany in June 1982. Rowan Perigrynne is Baroness Rowany – that is, the founding Baroness of Rowany.

Rowany Festival is the largest event of the year in the Kingdom of Lochac, and it is hosted each year by the Barony of Rowany over the Easter Long Weekend.

Folia Roani is the newsletter of the Barony of Rowany.

The device for the Barony, as described on the Lochac Roll of Arms, is: 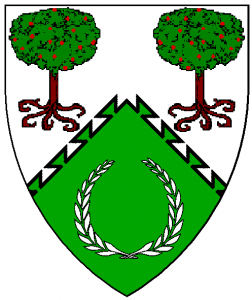 Baronial awards are bestowed by the landed Barons and Baronesses, often in response to recommendations they receive from the populace. The Baronial awards of Rowany are as follows:

Order of the Golden Staple

The Staple is for Service to the Barony. The token is a medallion with “Per pale vert and gules, a staple Or” upon it, but has more recently been created in the form of a large brass staple depended from two cords; red and green. This award was instituted at the Balder’s Eve event in 1982 by Baroness Rowan Perigrynne.

Order of the Rowan Berries

The Berries is for endeavours in the various Arts and Sciences. The token is a pouch bearing “Two rowan leaves conjoined vert, pendant therefrom three berries gules“.

The Frantic Falcon is for Event Stewarding “above and beyond the call of sanity”. As the barony is host to the Rowany Festival, the Kingdom’s largest event, you can imagine the necessity for this award. This award was instituted at the Balder’s Eve event in 1982 by Baroness Rowan Perigrynne.

Those combatants who serve the Barony in its martial endeavours for considerable time are asked to join the Yeomanry. The badge of the Levy is an Ailette (shoulder plate – a precursor to the epaulette) bearing “Per chevron dovetailed argent and vert“

Along with the Baronial Champion, the four Baronial Guards serve the Baron and Baroness in matters both martial and pacific. The term of service is a year. Two guards change-over at Yule Feast, and the other two are changed at Rowany Festival. You will know a Baronial guard by their belt – dovetail divided green and white lengthways with the symbol of the Rowany Berries on the tip.

At Rowany Festival AS 50 (2016), Their Excellencies Miles and Ameline introduced a new position into the Baronial Household – the Baronial Page. It is a Baronial simile to a Mouse Guard in that it allows children to serve in the Baronial Guard.

Ofttimes the Barony receives assistance from a gentle who lives outside the boundaries of the Barony – the Silver Cinquefoil is a mark of thanks and the esteem in which they are held by the Barony. The token is a silver cinquefoil (a five-lobed flower), either set as a pin, or as a pendant.

Order of the Dovetail

Awarded for consistent courtesy towards others, this award is given solely at the Baroness’s pleasure.