Rowany Festival AS48 was held over Thursday 17th to Tuesday 22nd April. It was the first Festival to be held at Camp Wombaroo (near Mittagong in New South Wales) and it was the second Festival to be run for 6 days instead of 5 (the first being Festival AS34).

The site map for the event was drawn by THL Antoinette Travaillie.

The premise for the war at Festival AS48 was the debate between the Baron of Rowany and the Baron of Politarchopolis over the governance of the Canton of Okewaite. More information on this ongoing debate is documented on the Reign of Alfar III and Angharat I webpage.

Various groups of Lochac processed into court, one group at a time, and proclaimed their allegiances with either Rowany or Politarchopolis. The processions were colourful with banners and heraldry a-plenty, and some groups even processed in to music or chanting.

Allies of the Barony of Rowany

Allies of the Barony of Politarchopolis

Different Baronies, groups and households of Lochac processed into opening court at Festival, proclaiming their support to one Barony or the other. Just when war seemed inevitable, the Oracle (played by Mistress Kiriel du Papillon) showed up crying out “this shall not be!”

King Alfar III took heed of the Oracle’s new message that war between Rowany and Politarchopolis would tear the Kingdom apart. In the place of such devastating war, His Majesty announced that Lochac’s first and inaugural Olympiad would be held to determine which Barony won the rights to govern the lands of Okewaite. To the winner would also go the perpetual trophy: a silk banner, commissioned from Lady Elizabet Hunter, depicting Nike the Goddess of Victory hoisted on a spear.

The Olympiad consisted of many rounds, including javelin throwing, discus, shot-put, running in armour, running out of armour, target archery and tug-of-war.

His Majesty announced that Rowany and her allies were victorious in the inaugural Olympiad, winning 93 points to 87 over Politarchopolis and her allies.

Festival AS48 saw four peerages, including three knighthoods and one laurelling.

Every morning from 8am, Earl Master Ruslan Novgorodcev from the East Kingdom taught heavy fighting classes and giving a perspective from a different part of the Known Worlde.

The format of this years Rose Tournament, named after the ladies of the Order of the Rose who host it, was paired teams for a king of the hill. There were two hills run concurrently, and teams could hold the middle for a set number of rounds before they had to rejoin the line. During the tournament, ladies of the Order of the Rose gave out tokens to those who impressed or inspired them.

This year was the second occurrence, and the rules of the tournament are as follows:

This year, there were eleven entrants and the victor of the tournament was Sir Stigh Joghensson (also known as ‘The Stigh’).

The Herladic Melee is a teams tournament that encourages groups to bring out as much heraldry as possible. Teams are scored on prowess and heraldic presence on the field. 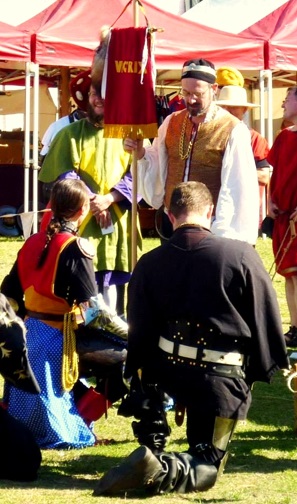 Lochac’s first Barony of Origin tournament was run by Count Niall inn Orkneyskii. The concept was that it was a teams tournament where participants grouped in the baronies they were first authorised in.

Team Mordenvale were the victors.

The H-FAT is the premier tournament in Lochac, attracting the largest pool of heavy combatants in a single tournament in the Kingdom. This year there were 74 combatants.

The first stage of the tournament this year involved splitting the combatants across five fields and completing a round robin. The top three placed fighters from each field were combined to one field for the second stage – a single kill, single elimination round. The finals were fought as single kill, triple elimination.

In previous years, a spear was the trophy for winning the H-FAT at Rowany Festival, however, this trophy had since been lost. This year, Baroness Blodeuwedd y Gath donated a new prize – an extant Roman military spur, dated 1-2nd Century AD, bronze, found in Burgundy, mounted in a frame.

Lochac’s Guild of Defence had two prizes played at Festival:

The newcomers tournament was primarily run by Provost Lindoret of Bryn Myrddin with assistance from Provost Gomez de Crecy. The rules for entry were to have been authorised in combat (including heavy fighting) for under a year. There were six entrants with the victor being Lord Robin.

The Baronesses’ Rapier Tournament included 33 combatants and was fought as a Defence Tourney style – meaning that combatants fight to 5+ points where a non-lethal hit is worth 1 point, a lethal hit is worth 3 points and a double kill is worth 4 points each. There was also a non-cummulative handicap system applied to the final tallies where White Scarves and Guildmasters started with 3 points, Provosts started with 2 points and anyone with the Order of the Rapier received 1 point.

The victor of the tournament was Don Angus Galbraith with only 6 points to his name (including 3 handicap points). He received the perpetual trophy of a buckler which had been repainted for this Festival by Baroness Eva von Danzig.

The Queen’s Glove Rapier Tournament included 29 combatants and was run as a challenge tourney. Don Angus Galbraith defeated Lord Timothy of Newton in the finals, winning the tournament. The Queen, Her Majesty Angharat I, took to the field herself to test the metal of the combatants.

As is tradition, Queen Angharat I awarded the Queen’s Glove to the one who inspired and impressed her the most on the day – that recipient being Don Sir Wolfram Flammenherz.

The Company of the Red Griffin crushed the Teams Tourney, to the point that the other three teams formed a Brute Squad and all attacked the Company at once. The victorious team included Don Owain Cantor ap Hughe, Lord Francesco di Falco di Petro Aviati vinattiere, Lord Lorccan Ruadh and Don Diccon Shorthand.

The Rapier Torchlight Tournament was themed as a cross-dressing tournament where entrants had to wear garb opposite to the gender of the garb they usually wore. It was fought at dusk by tiki torchlight.

The victor of the tournament was Lord Lorccan Ruadh.

The Dawnlight Tournament was run as a ‘real life’ style tournament where deaths and wounds were final.

The victor, winning a voucher to the Alchemy coffee shop (on site during Festival), was Guildmaster Don Táriq ibn Jelal ibn Ziyadatallah al-Naysábúrí.

The Heroes and Villains Tournament was jointly run by Provosts Lindoret of Bryn Myrddin and Gomez de Cressy.

Entrants dressed as a hero or a villain and could only be killed by very specific weaknesses. Heroes and villains incuded the likes of Batman, Wonder Woman, Dorian Gray and Iron Man.

The victor of day was Lord Timothy of Newton who was dressed as Puss in Boots.

The Kingdom of Lochac held her first ever Ladies Rapier Tournament this Festival.

The competition results for archery at Festival this year are as follows:

A chocolate easter bunny shoot was held for children’s archery with youth archers being divided into three skill divisions, with each division having its own chocolate rabbit target. Each chocolate bunny was named and despatched by a hail of well aimed arrows before the children feasted on the chocolate remains.

The children’s boffer auction tournament is a regular occurrence at Festival. Children use boffer weapons (i.e. padded weapons) to fight in junior tournaments without the need for armour. The victor receives a cloak that gets passed from champion to champion, with an embroidered patch sewn onto the cloak so that their victory is always remembered.

The victor for the older children this year was the young lord Tyran of Mordenvale and the tournament was hosted by Odonata.

Children’s Schola was run again this year, which is an A&S and entertainment program for the children of Lochac. It included hands on classes such as banner painting and entertainment such as storytelling of period classics.

The purpose was for Ladies of the Rose (i.e. the former Queens of Lochac) and past and present royal consorts to get together in an informal setting for some drinks, fun and general catching up. It allowed the ladies to swap stories, advice and generally relax. There were champagne cocktails and mocktails, snacks (including rose cupcakes that were commissioned from Mistress Monique de la Maison Rouge) and entertainment. Baron Crispin Sexi performed the song ‘Ladies of the Rose’ by Drake the Bard, and THL Aillis and Lady Annabel performed background music throughout the evening.

Mistress Margie of Glen More hosted the Boars Head Theatre in the tavern on the final night of Festival this year. People volunteered to perform a variety of acts for the entertainment of the populace, and the performances this year included:

The College of St Andronicus was named incipient no more by Their Majesties, and upgraded to a full college in the Kingdom of Lochac.